Jackson County COMBAT, the county’s violence and drug prevention program, is now under the oversight of the Jackson County Prosecutor.

“I will oversee this program in a straightforward and transparent manner,” Jackson County Prosecutor Jean Peters Baker stated as soon as she learned of a Jackson County circuit court’s ruling upholding COMBAT’s move to the prosecutor’s oversight.

Baker immediately initiated a performance audit by Missouri Auditor Nicole Galloway. Baker also announced that BKD would perform a financial audit of COMBAT funds. Both audits are underway; reports are expected later in 2019. 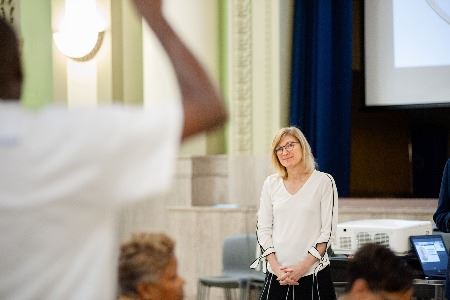 After the trial court upheld the Legislature’s action, the Prosecutor’s Office guided and supported the COMBAT staff in awarding Treatment and Prevention grants. Following the Aug. 31, 2018, ruling, Baker enlisted the Midwest Center for Non-profit Leadership and a nominating committee of community leaders in a search for a new director of COMBAT. On Oct. 29, Vince Ortega, who had served as deputy director, was selected.

Baker added, “Our community today needs more than ever for COMBAT to effectively reduce the disastrous impacts of illegal drugs and violence.”